For the 50th edition of E&M and, therefore, the 50th edition of DIAPHRAGM, we asked two people from vastly different age groups and backgrounds about the core of the diaphragm section: the role of humour in politics. Read on to see what Anton, who just graduated high school in Germany, and Mark, known as the Night Mayor of Vilnius, have to say about memes, the emancipatory potential of satire, and the limits of humour.

E&M: What is political humour for you?

Anton: Well, I think there are generally two areas of political humour: there are satire shows, satire pieces in newspapers that engage with political information in a humourous way. That’s more comfortable for people that find politics to be rather dry and boring. The other way humour can be political is using humour as a rhetorical tool in debates, for instance in parliament or also just among friends.

Mark: Perhaps the most effective and essential form of political expression in a democracy, or in a non-democracy seeking to become a democracy.

E&M: What role do you think laughter plays in politics?

Anton: I think it’s good to stay rational, especially because there are a lot of serious topics that need to be challenged. But I also think it’s worth remembering that politicians are people too, and just how we laugh at our workplaces or in school, they should have the opportunity to make their work life a little bit funnier, and have a laugh every now and then.

Mark: An underestimated role, especially in Eastern Europe. The role of laughter is to signify when a politician has hit a nerve, said something taboo, opens things up for discussion, makes people relax and think hey, we can and should talk more about this, it’s ridiculous to keep this as a taboo topic.

E&M: Would you say that what is considered funny has changed over the years?

Anton: I don’t think that humour as such has changed that much – I think it’s rather the content of it. Humour depends heavily on what’s going on in society in general, but the way it functions is pretty stable. And, of course, the concept of political correctness is changing the way humour is working, often to the benefit of those who are discriminated against in society.

Mark: Of course. In Shakespeare, plays it’s funny to talk about farts or suggest your opponent is sexually impotent. In Monty Python, it’s funny to parody the British Empire and Nazi Germany, which is a much more deep and sophisticated topic requiring a lot more intellectual talent to successfully make it funny. But already Monty Python is looking dated, because after something has been made funny, it starts to become less funny, people look for new funny things because humour has to constantly evolve. People get bored.

E&M: Many young people are into memes. Is this something you are interested in?

Anton: Yes, I’m really into memes. It can really differ though, what kind of memes I like. Some are sophisticated caricatures, some are blunt and stupid. Both have their own value, and both kinds make me laugh.

Mark: I like the old school original memes, the brave/awkward penguin, The Rock in a taxi, patronising Willy Wonka. Unfortunately they are losing power because they are old, but I still sometimes use them because everybody knows them. I am 43 so the new generation of memes is getting beyond my comprehension, I am like: “WHAT THE HELL ARE YOU TRYING TO SAY WITH THAT? IT’S NONSENSE! THAT’S NOT EVEN A MEME!”. I have to google the meanings of slang because I am not a teenager anymore. Also, I don’t like it when people call ANY picture on the internet “a meme”, because that ignores what a meme really is. But… I am old so I can’t tell people what words should mean anymore, words change, it’s a battle I can never win!

E&M: How do you think political memes influence public discourse?

Mark: I like memes, and I am strict with the definition, because true memes identify a kind of awkward emotion or situation and amplify it, applying it to many different debates repeatedly. The repetition is part of what makes it funny. And it’s funny because it’s true. Memes can make a political idea much more impactful and widely spread. Some of my most successful political comments have been memes, not long articles. I see absolutely no harm in that. Quite the opposite – I see memes as a way of bringing more people into a debate, not as a sign of degradation of debate. Without political memes – less people would see, understand and discuss political ideas. Often the idea was already in the viewer’s head but they needed to SEE it to really fix it in their consciousness. Then it stays there. And they share it. Unfortunately, this works very well with nasty alt-right ideas too; yin and yang.

E&M: In the past years there has been a vivid discussion about what humour can and can’t do. Some have rallied against “political correctness” stifling creativity and free thought, others have greeted the new standards as a sign of progress. Do you think humour should have boundaries? If yes, how should they be defined?

Anton: That’s very difficult to do. But in general, yes, I think it should. It’s obvious to me that humour shouldn’t entertain basic stereotypes about race or ethnicity, that’s just dumb and antagonizing in society. In this way, political correctness is something very positive. However, sometimes humour about certain political opinions gets policed – and this shouldn’t happen. Opinions are always subject to criticism, so they should be the subject of satire, too.

I agree that anything CAN be funny, even the Holocaust, but the more “edgy” you get, the more careful and intellectual you have to be about it. You can’t just say “black people stink, am i right?? hahahaha!!!” and then say “come on, it’s just a joke!!! Freedom of speech, dude!!!”.

If you’re gonna tackle things like racism and homophobia with comedy, then great, that’s a great idea, but it’s VERY HARD TO DO IT. And it totally depends on WHO is doing it, it’s just simply obviously true that a Jew can say things “sarcastically” which a Christian shouldn’t say because it’s just gonna look like bad taste, even if the intention was not bad. I am white, I am not gonna say “hey n****r pick some cotton!!! hahahaha! just joking!!!”. I also don’t think that this “joke” should be “banned”, but it should be strongly criticised, and when people strongly criticise it – you can’t just say: “hey, stop criticising my joke, I have a right to say this, freedom of speech, dude!” because freedom of speech definitely covers criticism of your racist joke more than it covers your racist joke.

The only people I really see arguing for total joke freedom are people who want to say dumb racist shit without any consequences. Or, they are very clever comedians who know how to make potentially racist jokes in the right context to make it funny and to make an anti-racism point. There is a great bit in my favourite comedian Stewart Lee’s show where he says something sarcastic and then looks at the camera and says something like: “BEFORE YOU WRITE A COMPLAINT ABOUT THAT JOKE, PLEASE KNOW THAT EVERYBODY IN THIS ROOM UNDERSTANDS THAT THIS WAS SARCASTIC, BECAUSE IT WAS OBVIOUSLY SARCASTIC, AT LEAST TO THEM”.

By the way no, I don’t think racism should be legal.

E&M: What do you make of the rise of politainment – a genre of media which mixes the coverage of political events with entertainment elements?

Anton: Here again, there are two sides to it. On the one hand, it really has the potential to engage audiences that usually do not care about politics too much, then again, when the narrative becomes too important compared to facts, it becomes problematic. Think of House of Cards: many people are taking it as a piece of political education and are drawing parallels to real life politics where there may be none. That’s not helpful.

Mark: It depends on the intention of the editors. Sometimes it’s just to grab ratings, not to inform the public about what’s going on. This is normally done by people who PRETEND they are informing the public honestly, but actually they are just assholes trying to grab money. Fox News, Delfi [One of the main online newspapers in Lithuania – Ed.], etc. It’s the dishonesty that I dislike.

But if the editors are just trying to introduce important information to an audience that wouldn’t normally pay attention, then great. I am not a snob, I don’t think information should be presented like in a university lecture, I don’t think you should have to get a degree in a subject to be able to understand things about that subject, I don’t think you should have to pass an exam before you vote, that would be the absolute opposite of democracy. Democracy needs as many people as possible to participate, and you’re not gonna make everybody love boring lectures so you have to do something else to get them involved. The example of Monty Python, particularly Life of Brian, is a good one. The famous TV debate about Life of Brian was also very good and brought the deeper issues to a much wider audience than if there had been no funny movie. You need something to break the ice and get the debate out of academic circles.

E&M: Do you think satire is emancipatory or oppressive?

Anton: Emancipatory, for sure. In history, the oppressed always have made use of satirical elements to criticise those in power. Today, this is happening on the internet, or even on public media.

Mark: Do I think knives are for food preparation or for murder?

E&M: What do you think about the statement that comedians are modern day philosophers?

Anton: Not much. I see basic German comedians like Mario Barth, and they couldn’t be further away from being a philosopher. All they joke about is football, women and beer. There really is no value to that. I can imagine however, that some of the more skilled comedians do have an actual impact on philosophical thinking, especially those engaging in satire. In general, I really disagree with the statement though.

Mark: Some are, some aren’t. Also… weren’t some comedians also latter day philosophers?

We thank the interviewees for their time. Their answers may have been edited for clarity or brevity. 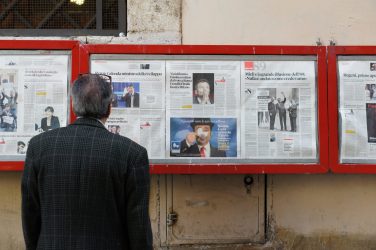 If it seems that in the past years, things have been going off the ...