DNA tests are all the craze today, for the genealogy nerds among us as much as the young curious minds. And with one of E&M contributors sharing their experience with DNA tests in Legs, we decided to look into the existing debate on these fascinating tests.

While they are even more common in the US, DNA tests have also reached Europe as companies started shipping overseas. And with increasingly lower prices, they have become accessible to all and gained in popularity since 23andme’s retail DNA test was dubbed the best invention in 2008.

This is the second in our Pro & Con series: there are two sides to every issue, read them here and decide for yourself!

It proves that we are all related in some ways.

A DNA test can give insights into the origins of your ancestors and the ethnicities you carry. Because human life is so short, this kind of knowledge can be easily forgotten and lost, but these tests can tell beautiful stories and even help reduce racism and stereotyping. By learning they belong to different ethnicities and communities (and indeed the test shows that we carry DNA from all over the world), people may develop more understanding for other communities. And if everyone did such a test, we would see how we are all connected and may be more inclined to be open-minded towards others. There can no longer be a claim of one pure race anymore. So why wouldn’t we want to help grow further bonds between individuals and understanding in the world?

You can make an informed choice about your health.

In many EU countries, DNA testing is forbidden unless it is for a medical purpose. However, knowing hereditary health issues can be crucial to make an informed decision as early as possible. It should not be up to a doctor or the country you live in to decide whether or not you can take a test that could help you with your health. This knowledge can enable you to take preventative actions which could save you money in the long run or to finally be able to stop worrying about yourself and your family. Especially for adopted children, children conceived by sperm donation, or those who never got to know their parents or relatives, this can be vital information.

Your DNA – your choice!

Simply put: it is your DNA so why shouldn’t you find out about it if you wanted to? The providers of those kits state that their use is for adults only. You are not harming yourself or anyone else by doing it, so it should be your choice. Whether you are interested in genealogy, want to know more about your health or are in search of your identity, a DNA test might give clarity and relief. It might not be medically necessary, but important for your personal well-being, so it is a decision that should be your own.

Do you know what data is being collected?

Giving your DNA gives access to a lot of your personal data. So the test company may only sell you data on your geographical origin, yet the sample they have contains information on genetic diseases, potential risks of cancer and other very sensitive information. Information, which shared with insurance companies for instance, or the bank where you want a loan, would become very problematic.

DNA testing companies are making money off your saliva.

Basically, the way this works is by testing DNA against a pool of other genetic data collected. So the bigger the pool, the more accurate the test. These companies completely rely on the data they collect (hence why the stats received may not be completely accurate as not all ethnicities are represented equally in that pool, by the way). But that’s not where the profit really is: the bigger the pool gets, the more interesting it becomes to other companies carrying out scientific or medical tests. While you only pay to get access to a little of your DNA history, DNA testing companies are gathering huge amounts of genetic data that can then be stored and shared with multiple other actors.

They are forbidden in some EU countries.

France, for instance, bans genetic testing unless it is by medical order. Of course, in the age of Internet, residents from countries where it is banned can still order a test from a company based in the US, the UK or Switzerland for instance – but they risk a fine. Most importantly though is that reasons for banning genetic testing are usually related to bioethics and the potential dangers of genetic discrimination. And that seems like a pretty good reason.

Also, should we be able to know that we may have a risk of a genetic disease which may declare itself in the next five years but also may not? Should we base our life-decisions on our DNA material? This then opens up the (much bigger) debate on the general implications of genetic testing, but let’s not get into this today. 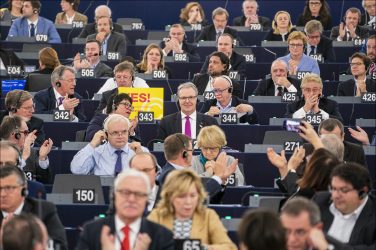 One of the most debated and controversial reports from the EU is currently the ...