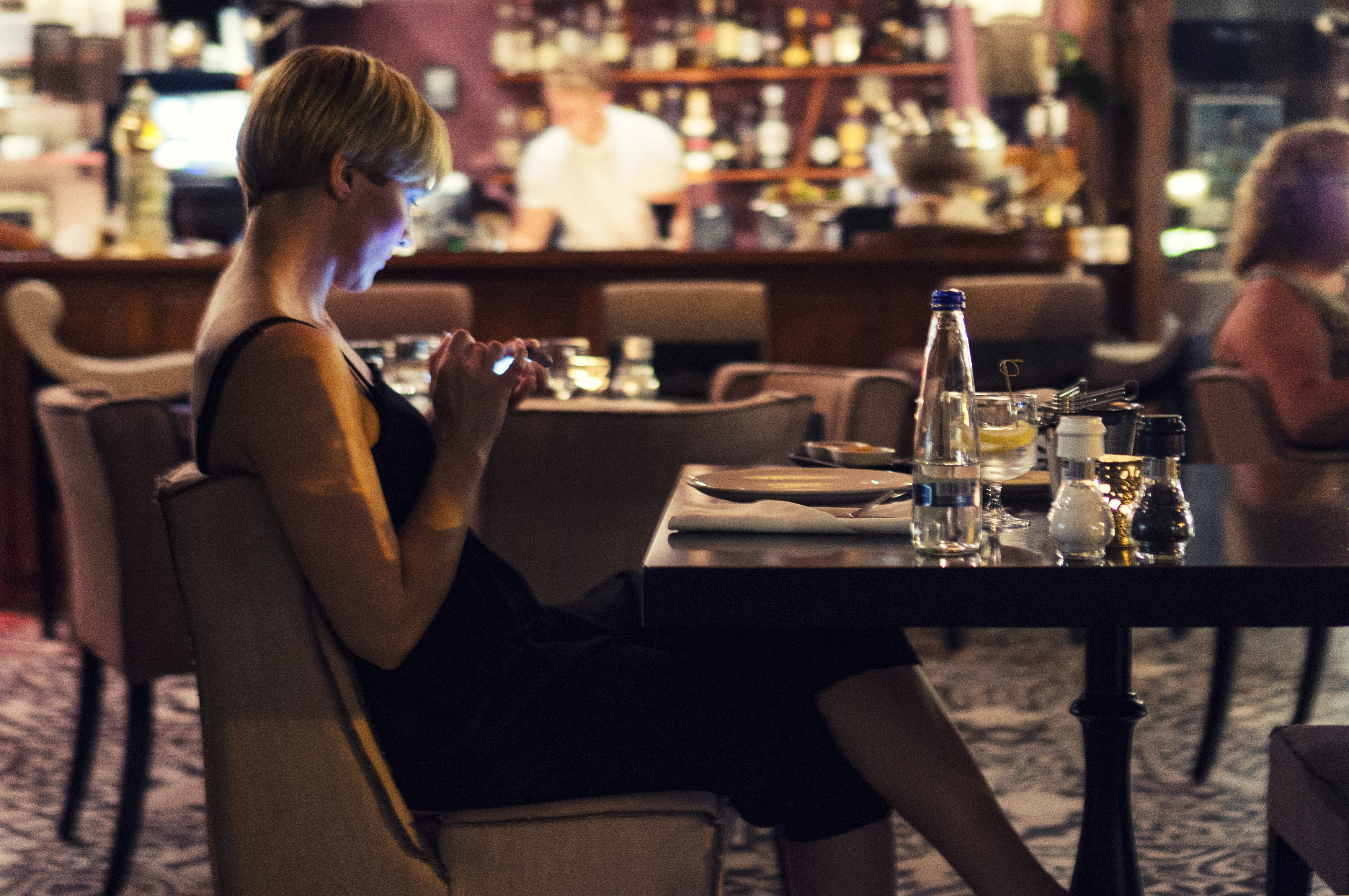 A growing number of young people have concluded that luxurious outings should not be reserved for the pursuit of sex or romance. These “self-daters” believe that trips to a classy theatre or restaurant are often best enjoyed alone. In her travels around Europe, Frances Jackson had done her share of self-dating before she even heard of the term. Read on to discover what she learned.

In spite of the high numbers of people living alone in Europe, our society still seems to be primarily geared towards people conducting their lives in pairs or groups. When was the last time you saw a table for one in a restaurant? Have you ever tried to find a reasonably-priced single hotel room? It is not an enviable task. And woe betide any girl who ventures into a bar alone for a quiet drink on a Friday night – she’s almost certain to be fighting off passes left, right and centre before she’s even reached the bottom of her glass.

Recently, however, a trend has emerged that apparently goes by the name of “self-dating”. Individuals indulge in all of the typical date scenarios – visiting a museum, going to the cinema, perhaps enjoying a play – but their only company is themselves. Even with the weight of cultural expectation stacked against you, dating yourself has its upsides. You certainly won’t have to wait around for anyone. There’s no worry that you might be stood up. You can’t even really be late for a date with yourself. And there’ll be none of that potentially awkward “your place or mine” business at the end of the evening. What’s more, if you’re single, there’s the added bonus that you might actually end up meeting someone: it’s so much easier to fall into conversation with a stranger when you’re out on your own. Above all, it’s an opportunity to do exactly what you want to do, without worrying about scaring anybody off. Fancy having a tipple at lunchtime? Feel free. Want to cry your eyes out while watching a depressing film? Be my guest, or rather, your own.

Against the backdrop of a family- and couple-oriented society, this kind of solo enjoyment feels almost like a quiet protest against conformity to certain norms and expectations. Self-dating is not by any means a rejection of relationships per se – you can, after all, be both loved-up and a frequent self-dater – but it does encourage you to spend quality time with yourself, far removed from traditional sources of external validation. While nobody is going to take you by the hand and gaze longingly into your eyes or tell you that you look lovely today, you could still end up having a deep and meaningful exchange with yourself.

For my part, besides going to a few occasional film screenings on my own during my first two years at university, I didn’t really begin to self-date until my year abroad. I wouldn’t exactly say that my time in Germany and the Czech Republic was a revelation, but being – at least to begin with – alone in a foreign country certainly gave me the impetus to go off and explore things regardless of whether I had someone to accompany me or not, something I wouldn’t necessarily have felt comfortable doing in the town where I grew up. I suspect that this new-found confidence was down, at least in part, to the ‘outsider’ status that is inevitably applied to foreigners: whatever happened, people were going to realise that I wasn’t a local, so somehow it didn’t matter if I was flying a little in the face of convention.

I visited countless exhibitions with just my own thoughts for company and took to whiling away afternoons in chic cafe-bars, sipping on a glass of Moravian red or tucking into a slice of Bavarian Topfenstrudel. Not all these “dates” were entirely free from embarrassment – in particular I remember being in a bit of quandary on the terrace of a bar in Brno when a waiter suddenly appeared at my table bearing a fresh drink and gesturing to a rather portly man at least fourty years my senior. “From the gentleman over there,” he said, smirking slightly. I wasn’t aware this sort of thing actually happened in real life and to this day I do not know what the correct protocol is in such a situation. But I’m sure it was all character-building, right?

A return to Germany for a Master’s degree paved the way for many more great ‘dates’ with myself. But the longer I was there, the more the place felt home. I was no longer a stranger in unfamiliar city. And then, as is so often the case, I fell in love with a local boy. After that, my self-dating seemed to peter out of its own accord. That’s not to say that I have stopped taking advantage of the cultural delights that the country has to offer; merely that when I do so, I prefer to share the experience with my boyfriend, mainly because – regardless of how trite it may sound – I genuinely enjoy his company and want to hear his take on things.

Being – at least to begin with – alone in a foreign country certainly gave me the impetus to go off and explore things regardless of whether I had someone to accompany me or not.

However, for fear that I might one day turn into someone incapable of doing things on their own, I decided it was high time to get back into the swing of self-dating – although not without giving my boyfriend a heads-up about the plan, just to make sure that I wouldn’t be putting his nose out of joint. I needn’t have worried. “Oh, I do stuff like that all the time”, came the glib reply. “You’re always so busy.” My boyfriend, it transpires, is a great one for going to the cinema alone. He has the technique honed to a fine art: he books his ticket online, sidles up just as the credits are starting, enjoys the film and is on his way before anyone has had the chance to notice that he was there by himself.

Having heard all this, I took a leaf out of his book and set off to see a Dominik Graf’s Die geliebten Schwestern without a care in the world. To make the experience even more decadent (and, secretly, to allow myself to pretend that I was Peggy from Mad Men, sneaking out of the office to go to the cinema whenever I feel like it) I chose a matinée showing. Unfortunately, I hadn’t counted on the mid-afternoon traffic being so heavy. While it may be true that you cannot be late for a date with yourself, it turns out that it is still very much possible to come extremely close to missing the start of a feature.

Despite being the only non-retired person in the audience, I really enjoyed the film – a cerebral period piece about the poet Friedrich Schiller that I don’t suppose my boyfriend would have liked anyway (I did mention it to him on one occasion, but his eyes glazed over the moment I used the words ‘Schiller’ and ‘costume drama’ in a single sentence). What particularly appealed to me about the experience was the fact that I was able to walk out of the cinema and cycle all the way home without uttering a word to anyone. It gave me time to form a considered opinion and give ample thought to the moral conundrums raised by the film.

As a member of what one might term the Erasmus generation, it seemed only natural that I quiz various friends and acquaintances from all around Europe to find how our experiences of self-dating tally. I have discovered that I am definitely not alone in feeling that being in foreign climes makes you more open to the idea. I know a Spanish girl, for example, who wouldn’t think twice about going to the cinema on her own in Germany, yet is very much aware of what other people might think, were she to do so back in Andalusia. She derives a certain security from the fact that her knowledge of local cliques is here not as nuanced as it is in her hometown. But whether it’s always simply a case of having fewer inhibitions abroad or whether we’re also influenced by more pragmatic considerations such as not knowing enough people in a particular place, I’m not completely sure.

Equally, amongst young Europeans, modern technology appears to be playing its part. A particularly intriguing comment came in this respect from a German friend who grew up in France. While claiming to have absolutely no qualms about eating alone in a restaurant, he let slip that he always likes to tell others about the meal he’s enjoying – either by posting a picture on Facebook or sending a message via WhatsApp. On the one hand, this habit of his begs the question whether we can ever be truly alone in the age of smart phones and 24-hour availability. On the other, it seems to suggest that for all his blasé attitude about the matter, he might have a deep-seated need to share his experience – albeit in digital form. This in turn raises the possibility that smart phones may actually provide people, who would otherwise feel uncomfortable being alone in public, with a sort of social crutch, a means of enjoying time in their own company.

I’ve also no doubt that attitudes towards self-dating are affected by cultural mores. Certainly, I can recall the aghast looks on the faces of a family I once stayed with in Albania, when I expressed an interest in taking a trip to the seaside on my own. In fact, I don’t really remember anyone sitting in the cafés of Tirana or visiting the city’s museums alone. I’m told that in Hungary, too, even the weekly shop is considered something for whole families rather than individuals to undertake, and it’s only really the widowed whom you’ll see embarking on traditionally social activities on their own.

This final point leads me to what I believe is the crux of the matter. Self-dating is a conscious decision to embrace your own company. It should not be seen as the natural consequence of suddenly finding yourself alone, but it may well offer a means of coping with the situation, should it befall you, proving that being alone does not have to be synonymous with loneliness. Go ahead, try it; you never know, you might even like it – and maybe yourself too.

Last issue we asked Young Europeans about their experiences with their period. The editors ...