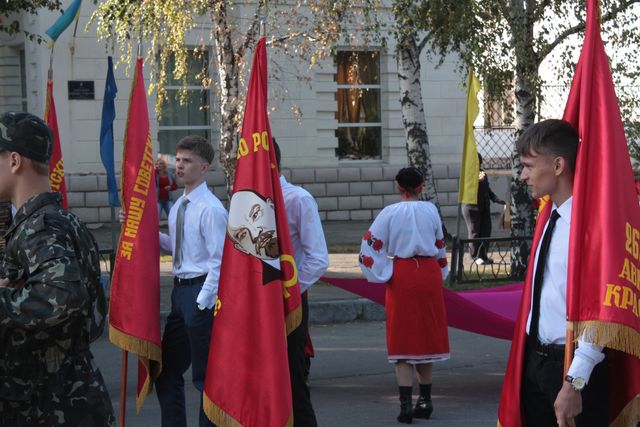 Following on from his trip to Korosten’ for the pototo fritter festival, E&M‘s Christian Diemer is again caught up in a Ukrainian city’s celebrations as Lovoza marks the 71st anniversary of its liberation during the Second World War and honours the veterans who fought to achieve that freedom. However, thoughts of a more current conflict are never far from the surface.

“You are not one of us”, says the man with the beer on the opposite seat. “Where are you from?” Early morning, I am on the train to Lozova, province town between the eastern Ukrainian metropolis of Kharkiv and Dnipropetrovs’k. “Ich – heiße – Sergey – hoh”, he pronounces the words like a pair of copulating elephants, to make me understand how much he likes the decisive, harsh, and “manly” German language, as he puts it. Russian, he claims, is a soft language. French is for women anyway. Sergey gives me one of his beers. He is of the opinion that we should solve crosswords together.

Sergey is Russian. He studied in Saint Petersburg for eleven years before coming to Luhans’k. Is he one of those that Putin claims to protect? “Putin is the second Hitler”, he makes clear. “Russia is a dictatorship. Here in Ukraine, you can speak freely, there you cannot.” Like many, he is sure Putin wants a land connection to Crimea, which would, apart from Donets’k and Luhans’k, also involve the port city of Mariupol’. He assumes Putin will go further too, taking Dnipropetrovs’k and Odesa. And who knows whether that will be it.

Sergey shows me his passport, a temporary one, he has lost the original. The authorities in Luhans’k offered him a new one, but from their new government, the LNR [Luhans’ka Narodna Respublika, Luhans’k People’s Republic]. “What the hell for, I don’t want that, I want my Ukrainian passport!” He left for Dnipropetrovs’k.

Sergey explains how in the beginning people in Luhans’k and Donetsk simply strived for more self-determination and autonomy, notably within Ukraine, “and then all of a sudden the Ukrainian army was there, throwing phosphor bombs, shooting people.” The accusation about the use of phosphor bombs has been circulated by Russian media, and this entire interpretation is more in line with the perspective of those supportive of Putin’s policy. To make things even more complicated, Sergey concludes that this conflict is not about Ukraine and Russia at all, but about Russia and the USA, both of which are basically defending their respective interests.

Before I can enquire further, the conductor gives me my ticket back: “Lozova. You want to get out, or go further with him?” With a meaningful grin, he adds: “I am from Crimea, by the way.”

The train station of Lozova, erected 1869 on the Kharkiv-Sevastopol’ line and soon expanded with additional connections, harks back to the time when this was an elegant, prosperous province town. WWII has left little else. The city was conquered a staggering three times by the Wehrmacht and then won back by the Red Army between October 1941 and the summer of 1943, partly switching back and forth within less than three weeks. The last and final liberation was on 16 September 1943, 71 years ago to the day. Lozova is celebrating its city holiday.

Are you Russian or Ukrainian, by the way?

Yet nowadays Lozova is only 90 kilometres away from being a theatre of war all over again. “Slov’yans’k” is written on the traffic signs. The overland road is open up to a fork junction, the last part to Slov’yans’k is blocked. In a one-storey office between slab buildings and bad roads, Aleksander – black jacket, white shirt, firm handshake, sonorous voice – co-ordinates the supplies for ATO, the so-called Anti-Terroristicheskaya Operatsiya [anti-terrorist operation].

“Whether Russian or Ukrainian speakers, we understand each other marvellously here. I talk Russian, Maksym, you talk Ukrainian. We talk Russian with each other now, we can switch to Ukrainian in a second, one can talk Ukrainian, the other can answer in Russian. It is not an issue, it is all made up. Maksym, by the way, are you Russian or Ukrainian?” Maksym is a local activist for Bat’kivshchyna [Fatherland], the Yuliya Tymoshenko party. “I am Ukrainian”, he answers in Russian.

Aleksander, who never seems to stand still, shows me around in the depot. The machine guns have already been transported to the front. There are some bullet-proof vests, produced by a Ukrainian company from Dnipropetrovs’k using Finnish components. Aleksander helps me into one. It weighs heavily on my shoulders. “We have bought old Bundeswehr uniforms, they are thirty years old, but they are still better than our new ones.” One costs upwards 800 Hriven [at the time around 50 EUR]. Before running out for a cigarette, Aleksander arranges the uniforms for my camera, so that the German badge comes to lie next to a Ukrainian. “Of course we want Europe to supply us with arms. We don’t even have the money to buy basic equipment. I have to decide to buy either helmets or bullet proof vests for the boys out there. So I decided for bullet proof vests and against helmets. The body is a larger target than the head.”

Aleksander is furious when talking both about Russia and Europe. “Do you seriously believe over there in Germany that the facists and nationalists walk around in Ukraine and plague Russian-speaking people? That is so pathetic.”

“People are fighting 100 kilometres from here, for your values“, Maksym reiterates the point. “They have made their choice, in favour of Europe and against Russia. And what do you do? You are concerned. You are not the Organisation of United Nations, but the Organisation of Concerned Nations. Ukraine may not be a member of NATO, but I don’t really see what a piece of paper matters here. I consider Ukraine, after all it has gone through, to have a moral claim to be defended against this Russian aggression.”

“Where do you think Putin will stop?“, Aleksander shouts. “Kyiv? Warsaw? Berlin? You have no idea! If NATO helped us to kick Putin’s arse – I am sorry – the front would be in Moscow in a week. But, well, as long as it doesn’t, it’s us kicking his arse instead.”

In the neighbouring room, a Ukrainian flag bears the signatures of those Lozovans that have left for the front. About 300 in total, two have fallen. “Victory or death” is written next to one of them. “You know who wrote that?”, Maksym asks me. “It was Yuri.” A year ago, Yuri, a slim, communicative youngster with backpack and baseball cap, had shown me his favourite rock and crossover bands. We try and call him, but his phone is shut down. Security measures at the front.

Glory to the heroes, glory to Lenin

The city holiday celebrations starts only in the afternoon and is not to last for long – due to the war. Nobody switches off the radio blasting the streets, so the transmission of an ongoing Ukrainian parliament session merges with the Soviet marches of the military band that has gathered on the Vulitsa Zhovtneva [October Street]. The autumn wind unfolds the flags carried by young boys leading the procession: SSSR [Soyuz Sovyetskikh Sotsyalisticheskikh Respublik, Union of Soviet Socialist Republics], a likeness of Lenin. Although just a few hundred kilometres away Putin appears to be working on the rise of a new Soviet Union, no one seems to attach any importance to the connection. “This is all about the veterans, it is their holiday”, I am told.

Only the traditional pin ribbons in the colours of the St George ribbon (orange and black, a symbol of the Red Army) obviously seemed inappropriate to the organisers. And so for the first time, the mayor, striding towards the band to welcome the procession, is wearing the city colours (green and pink) on his suit instead. A former member of Yanukovych’s Partiya Regionov [Party of the Regions], he even looks a bit like Yanukovych himself: tall, serious, power-conscious. Yet the party that once dominated the political ongoings in the East of the country is now de facto non-existent.

Flowers are laid before the Lenin monument, the local and regional mayors highlight the sufferings and valour of the veterans. “Thanks to your struggle, we, citizens of Lozova, city of flowers, city of sports, city of culture, live under this sky.” The Heroyam slava! [Glory to the heroes!] does not elicit a response. Actually, it could not be less connected to the patriotic battle cry of the Maidan. Girls goose-step by. Soviet marches give way to renditions of Ukrainian folk songs. And yet the current situation is referred to: a minute’s silence for those currently at the front. The ticking of sixty seconds is played from a tape.

Location change: in front of the monument to Ukrainian national poet Taras Shevchenko. A handful of veterans are seated and waiting for their portion of kasha, a traditional pulpy millet dish, and 100g of pungent vodka. Two smartly dressed young men moderate a karaoke show. An older woman performs Russian pop, a one-legged man in a wheelchair recites Russian war songs: “Three cadets went down the street…” The Ukrainian folklore ensemble in full traditional regalia that performs in between seems like from another planet, although it is from the neighbouring village.

For the holiday, my new friend Anna has put a flowery summer dress. She says she is a bit afraid of terrorakty. It is nice and calm in Lozova when the celebrations peter out, the wind has blown the rain clouds away. “But you never know.” 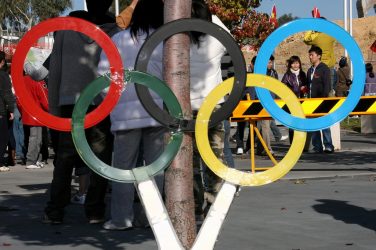