E&M is an award-winning online magazine at the forefront of independent European media.

Europe is more than just the EU. Europe is a state of mind.

We love the many changing faces of Europe: a continent, but with flexible borders in both West and East; a loose community on the surface but possessing a common history spanning thousands of years; a transnational political system, but strikingly individualist at its core, a unity, but brought forward by accommodating differences – about 50 countries, more than 700 million people speaking 100 languages and confessing most known religions.

From the bustle of European hot-spots like London, Paris and Berlin to the idyllic towns of Tuscany, from lava bursts in Iceland to the pristine forests of Bialystok, from hipster vintage to post-socialist chic, from Scandinavian death metal to Balkan ska, from post-modern individualism to family values and from neo-liberalism to right-wing extremism, Europe packs a great deal of contrast under one roof. For us contrasts are what makes Europe a viable reality: they are advantages that we should build upon and encourage, as Europe has been and will always be more than the sum of its parts.

We believe in an open and inclusive society in Europe, a crystallizing European “demos” that is able to weather instabilities, bridge divisions and guarantee change, precisely because it has the potential to house the existing disparities. A Pan-European perspective is thus an essential element to understanding and discussing the different aspects of a cosmopolitan and varied European society.

In light of the challenges faced by Europe today, we feel E&M’s approach is more relevant than ever. With the still unresolved euro crisis, the ongoing refugee crisis, a growing uncertainty for the fate of the EU, not to mention persistent identity and value considerations, our transnational perspective allows us to explore what European issues mean for Europe as a whole, as well as for all Europeans.

E&M is a web-based media platform dedicated to high-quality transnational journalism in Europe. A Pan-European dimension is key to everything we do, from the composition of E&M team, to the way we function as a close-knit community of over 1500 contributors, volunteers and artists, dispersed across the continent, and indeed the world.

E&M strives to pinpoint the unique aspects of what it means and feels to be alive and kicking in the dynamic political, social and cultural context of 21st century Europe. Keeping a sharp eye on the everyday quirks, we also try not to miss the bigger picture, drawing parallels and connecting the dots, which allows us to focus on issues that transgress borders.

Above all however, we would like to make Europe personal. As a dynamic outlet, our aim is to   reflect on the disparate aspects of Europe in a manner that is in tune with the actual sentiments, perspectives and frames of mind that shape the life of its citizens.

E&M is a framework for discussion that we would like to keep maximally open to input from anybody that feels akin to life in Europe. We try to embrace as many opinions as possible coming from as many corners of Europe as possible. All contributions are very welcome.

E&M embraces a diversity of European opinion, and it is important to us to foster debate and dissent. This said, racism, hate speech and derogatory language are not welcome here. If you have something to say about Europe, please make sure you articulate it in words that do not purposefully offend anybody. Wag the dogs, don’t poison them!

Beyond that, it is worth stating openly that, clearly, we are passionate about the ‘idea of Europe’, and we make no apology for that.

Our motto is to “make Europe personal”, because Europe is often only identified with politics and bureaucracy. The magazine was founded in September 2007 and first published in July 2008, and since then we’ve been writing about every possible “Europe” – the Europe of young masters students, the Europe of Chernobyl survivors, the Europe of the European Commission, the Europe of immigrants and the Europe of expats.

Over the past nine years, the magazine has published a new issue every three months and built up an online community of more than 1500 participants. More than one hundred authors have written for the magazine. The founding team comprises eight people with six different nationalities, and the writers and readers come from twenty different countries. Editors, authors and community work together voluntarily for a common goal: to capture the feeling of a new, transnational lifestyle.

The magazine is not funded by the EU or affiliated bodies, although we have received some prize money and some funding for individual events. Everyone involved in the magazine is an independent volunteer. Find out more about our partners here.

History of the Project

E&M was born in September 2007. Six of our founders met for the first time in Berlin as part of the Studienkolleg zu Berlin programme. There, the idea of an online magazine arose: in spite of different backgrounds, the founders all agreed that for young people who were enthusiastic about Europe, there was no magazine in the European media landscape with which they could identify as “Europeans”. The obvious solution for those founders was to create a magazine of their own.

The eight founding editors could not have been more diverse. They came from Germany, Austria, Latvia, Poland, UK and Bulgaria and studied journalism, law, German, European studies, philosophy and economics. (And since then, contributors have come from all four corners of the planet.)

A frantic few months of planning and preparation followed the conception of E&M, and then, on 1 July 2008, the first edition was published and presented to the media. In 2010, the project was nominatedfor the Charlemagne Youth Prize (we were the UK nominee), and in 2011, we won first prize!

A magazine for the whole self

We believe that if Europe is understood as nothing more than a political unit with corresponding institutions in Brussels and Strasbourg, people will struggle to identify with it. The five sections of our quarterly magazine reflect different ways of thinking about Europe as represented by the human body: Brain, Heart, Diaphragm, Sex, Legs. 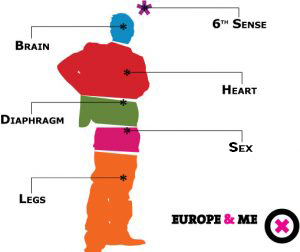