Stuck between mighty and almighty neighbours in a debatable corner of Europe, the Republic of Ceeland is undergoing a mid-government crisis. That’s why its Prime Minister needs to find someone to blame. Because there is no doubt that the country was in dire straits when his party took it over and the efforts to fix that mess increased the government budget deficit. Due to this, an audit was called in the Diet, the parliament, to list down the wrongdoings of the culprit, Donald.

It’s 2 am and the empty skyscrapers towering above the capital of Buvaprawa pierce the orange glow of a Thursday night. Junior and senior accounts left their desks a few hours ago and are now dreaming about pristine Swiss mortgages. The pale lights of bridges spanning a wide river shimmer on the water. The whole town is asleep save for the odd cabbie, foreign reveller and local uberdriver. Them and the three hundred forty-one Ceelarian MPs attending the final stages of the aforementioned audit. They have been having a long day.

It started fifteen hours earlier with the Treasury Minister speaking of “seven deadly sins” committed against Ceeland. It went on with the Finance Minister calling those sins: “egoism, contempt, negligence, greed, mismanagement, extravagance, hate.” Accusations debated one by one by 16 MPs of the ruling party and the opposition in their ensuing speeches. At midnight, a paper scroll naming all the allegations towards the culprit was shown by the Foreign Minister. The Diet welcomed it with a mishmash of handclaps, booing and cheers.

“This is the picture Ceelarians must know,” said the Prime Minister.

“The security of our Republic was endangered,” stressed the Defence Minister “as well as its international reputation,” added the Minister of Culture and National Heritage.

Words that are now summarised by the Justice Minister: “I’d prefer not to jump to hasty conclusions, but we all know it’s Donald’s fault!” He cries.

“It’s because of Donald’s irresponsible behaviour towards Ceeland that our sovereignty is under attack,” adds the Justice Minister.

What makes matters worse is that Donald is the grandson of a bloody Jerry and the father of a much-rumoured blonde fashion blogger turned book author.

What makes matters worse is that Donald is the grandson of a bloody Jerry and the father of a much-rumoured blonde fashion blogger turned book author. As contemporary Ceeland is proud to call itself a nationalist and God-fearing country, the grim patriarch and the flirty offspring of Donald do not fit in the picture. The Christian-conservative values he seemed to embody were just a mask.

“We thought that in his role he could defend or promote Ceelarian interests, but he did quite the opposite. That’s why he’s not welcome here anymore and I ask for his lifetime ban from the Republic of Ceeland,” the PM addresses the Diet.

“Donald betrayed us!” cries a MP.

“He’s not our ally!” yells another.

“Be quiet, honourable colleagues – the premier speaks up waving his right hand in a weary gesture – I understand your frustration, but time for anger is over. Let’s show Donald that Ceeland is still a sovereign country. Let’s show him the authority of this parliament!”

The vote took place at 3.20 am. 333 MPs voted “Yes” to the proposal of banning the culprit from Ceeland. 4 MPs voted “No,” but only because they were drowsy. 3 MPs didn’t show up. The Finance Minister swore that a detailed account of Donald’s wrongdoings was going to be sent to the culprit first thing in the afternoon. After that, the yawning MPs were driven home. Dozens of cleaners entered the Diet to make it presentable. One MP who had locked himself by accident in one of the restrooms was set free.

President Donald got an official letter from Ceeland on Saturday morning together with the usual bundle of newspapers and correspondence. He didn’t even bother to open it. He knew perfectly well what was in there: bollocks. He wasn’t the culprit they were looking for. He wasn’t the right Donald to blame. With a sigh, he switched on his tablet and tweeted something useless. His daughter was the first one to like it. 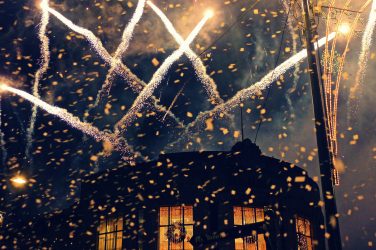