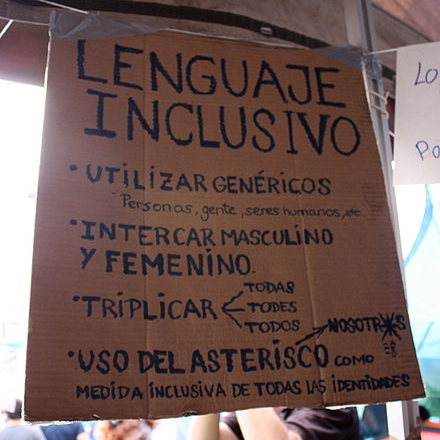 Activists, linguists and psychologists have a master plan that will change the world: to get people speaking in more gender-neutral language. Read it all here.

The fight might have different faces, but they all seek the same outcome: a language that is gender neutral.

Portugal, May 2013. Twenty Portuguese feminists and LGBTTQIAP (lesbians, gays, bisexuals, transsexuals, transgender, queers, intersexuals, asexuals and pansexuals) activists challenged the spelling rule and created the “Acordo Queerográfico”, the queer orthographic agreement (‘Queerográfico’ a play on words between queer and orthographic). They argue that language is naturally discriminatory, with gender-specific pronouns, as well as gender in plural and they wish to challenge the “establishment”.

“We face language rules that dictate that for instance in a meeting with 300 women and one man one shall use the word participants with the masculine pronoun coming before, not even considering having a pronoun for someone who does not identify himself / herself as a woman or a man”, they state in their blog.

Latin languages, such as Portuguese, Spanish, Italian and French, all have gender pronouns as well as gender plurals and the usage of gender in terms which describe people. Also,  generalizations with men prevail over women. For instance, and using the example above, what the activists wish for is that the reference to the masculine in “os participantes” (where “os” indicates plural masculine) when referring to a group composed of mostly women, becomes neutral. And of course they already have a whole array of solutions: to use an asterisk (*s), a ‘x’ (xs), a @ (@s), a æ (æs), the anarchist symbol Ⓐ (Ⓐs) or just simply to use the female article or both at the same time (as/os).

Currently, there isn’t any language in the world which does not distinguish between the genders at all, leading many linguists and psychologists to believe that gender is paramount to social organization and structure and indispensable where communication is concerned.

So is there an intrinsic connection between language and gender equality?

Sweden took a big step in 2013 by replacing the words “he” (han) and “she” (hon) with hen, a neutral pronoun, in the Swedish National Encyclopedia, .

And it’s no surprise that countries where gendered languages are spoken were the ones who showed overall less gender equality, compared to genderless languages.

It is also relevant to mention that five of the top 10 countries for overall gender equality are European Nordic countries (Denmark, Finland, Iceland, Norway, and Sweden), indicating that regional cultural similarities might also play a part.

In other countries and languages the situation is far from changing. In many languages the rule is to use male words or pronouns when referring generally to groups where there is at least one man present.

Job descriptions are also a challenge when it comes to gender neutrality. In gendered languages there is strong usage of feminine names for professions associated with women. In French, people will say ‘institutrice’ to refer to a teacher of an unknown sex for small children.

In the German language, genders are very present and you’ll always know if the subject is male or female. However, there is good news. Just recently, in 2013, two universities  decided to banish generic masculine forms of titles like “professor” from all official documents. Germany ranks 14 on the Global Gender Gap Report 2013 and has been having discussions about gender equality and language for at least 20 years.

“If you want to change the reality, you have to change language too,” Luise Pusch, a German feminist, told to Spiegel newspaper.

Dr. Matthias Jaroch, a spokesman for the Association of German Universities, thinks differently. Interviewed by the same newspaper, he points out that changing words “doesn’t bring anyone closer to gender equality”. Is it a classic case of women vs. men?

This does not only happen with gendered languages. English, a natural gender language, also has its issues with sexism. For instance, with the words ‘manageresses’, ‘comediennes’, or ‘air stewardesses’. Or even when addressing a figure of authority, many people still use the masculine ‘policeman’, instead of a more gender-neutral ‘police officer’.

Fortunately, most of these words or their usages are considered old-fashioned nowadays and there is some political effort to avoid them.

In Portugal, as well, there are some top-down efforts to make language more gender neutral. In 2013, new guidelines from the Portuguese General Assembly officially changed the expression “Men rights” to “Human rights.

In France, in 2012, the gender-neutral word “parents” has replaced the words “mother” and “father” from official French forms, in a big step not only for a gender-neutral language but also for the gay community.

The last two years have been of great importance globally for more gender-friendly language and a more equal society. E&M hopes that 2014 brings even better news.

Some tips for gender-neutral / non-sexist writing:

If you speak Portuguese or Spanish:

Note: E&M tried to write this article in the most gender-neutral way possible. 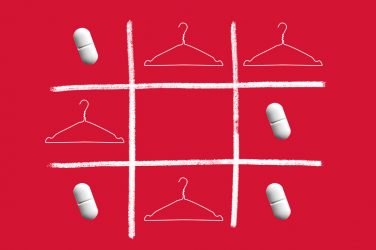 Despite decades of female empowerment, the right to abortion continues to be contested in ...