‘Little Jerusalem’ is what Sarajevo is often called – a city where a Mosque, an Orthodox and a Catholic church, as well as a synagogue, can be found within the same square kilometre. The old town with its narrow cobbled streets evokes an Oriental feeling. There are houses built in the Ottoman tradition and bazaars everywhere. Just a few streets away you can sit in a Viennese coffeehouse and imagine being in Budapest. Or you visit the infamous Latin Bridge over the brownish Mijacka River where Franz Ferdinand’s death triggered the First World War.

And there is the most recent war, still painfully visible on the facades of many buildings. But the most amazing thing is the atmosphere – nearly four years of siege couldn’t destroy people’s spirits…

The city seems to have a violent urge to live. The old town is crowded at any time of the day. People sit drinking Turkish tea or coffee and buy Kukuruz – grilled sweetcorn – or salty popcorn, sold on the streets. In the summertime there are so many festivals going on that you easily lose track. Most importantly: The 18th Sarajevo Film Festival.

The dead are still part of the city they had to die in, but they don’t keep people from looking ahead.”

The film festival was founded during the war” says Maja, assistant to the executive producer. “My boss ran the projector with his diesel engine. The entrance fee at the time was one cigarette.” The 23-year-old, slender woman with the blond undercut speaks perfect German with a slight Swabian colouring – she lived in Stuttgart as a refugee. When I meet her, she is very busy with preparations and only has time for one smoke before she has to hurry back to work.

The film festival is now the most important one in South East Europe. People from all over former Yugoslavia and beyond show their movies and at the airport I see ex-football player Eric Cantona arriving to present a film. Europe suddenly seems very close.

And still, with all the fuss going on, there is a rather quiet thing we can learn from this city: death is just a part of life. You find the slim, white Islamic tombstones everywhere in parks and the Mosque’s old gardens. As Sarajevo’s inhabitants could not leave the city during the siege, bodies had to be buried in the centre. There is nothing scary or depressing about the graves. The dead are still part of the city they had to die in, but they don’t keep people from looking ahead.

Studying Europe “From the outside”

“I don’t want any nationality, religion or doctrine to stop me from living my life. I want to climb mountains without thinking of mines and be free. I want a decent salary, to pay taxes, go on vacation – this is not too much to ask.” declares Lara. She has a masters degree in European Studies from the University of Sarajevo, light brown hair and unstoppable energy when talking about politics. I meet her and Mirna, one of Lara’s fellow students, for Turkish tea and a water pipe.

You can’t say the entire nation is divided. Some individuals are just really loud and some of the less educated follow them.

They are lively young women, 30 and 26 years old, who can still laugh about the deadlocked situation and make politically incorrect jokes when it gets too bad. For them, it is normal to have friends from all ethnicities. “My Christian friends would give me Easter eggs every year and come over for fast breaking at the end of Ramadan” says Mirna. “You find the same last names in all groups, so we know we are connected. The hatred comes from the politicians,” Lara tells me, and Mirna adds: “You can’t say the entire nation is divided. Some individuals are just really loud and some of the less educated follow them.”

In their class, 32 Serbs, Croats and Bosniaks studied together, most of them women. The master program aims to qualify its students to assist the process of European integration. There are courses on European history, law, institutions and economy. “We are the experts,” says Mirna, “but it still is so difficult to get into a Bosnian institution! We write many applications and none ever gets answered. I guess you have to bribe someone to get into the system.” I ask about the international institutions. They both laugh: “During our studies we never visited EU institutions; we were never invited! There recently was a job opening at the Office of the High Representative (OHR), but you needed eight years of experience in the field – how are we supposed to get that?”

The OHR is another curiosity in this country: as part of the Dayton Agreement, it is responsible for “overseeing the implementation of civilian aspects of the Peace Agreement,” as its official website says. Among the special powers conferred on the High Representative is the possibility to remove politicians from their offices and even ban them from future activity if they hinder the process of democracy. I raise my concerns about an institution whichis implemented by foreign powers but mighty enough to expel elected parliamentarians. They don’t seem to be shared, though: “Democracy only works when a system is honest. I don’t care about sovereignty; I would like the OHR to stay and be more aggressive; finish the job,” I heard from Tina at OKC Abrašević in Mostar. And Franciscan monk Mile Babić emphasised: “They are part of our constitution, so they have to act! They have to truly implement human rights.”

Both Lara and Mirna would have loved to get the job and shape progress in their country from within the OHR. But it seems impossible and so they turn sceptical about the institutions and the EU. “I don’t feel European,” says Mirna. “Bosnia and Herzegovina didn’t take part in shaping the EU. The Balkans are still a planet of their own.” Like many people I met she doesn’t distinguish between the idea of Europe and the idea of the EU. It seems too connected to her.

Europe is a Christian club. Christian wars continue today, just with other weapons.

Lara isn’t of this opinion: “I feel European!” she says. “I am proud to be part of this continent. It has some of the best things humanity can offer regarding technology, freedom of speech and freedom of choice. This is something very powerful that Bosnia should adopt.” And still she is not convinced that the EU, as it is, can really put these ideas into effect. Many people here feel excluded and as if the EU didn’t trust them. Mirna actually wrote her masters thesis about how Europe is a Christian club. “Christian wars continue, just with other weapons,” she states.

Indeed, in times where voices are raised in the EU saying that Islam is not truly a part of Europe, it is important to remind people that it has actually been here for seven centuries. Nowadays, the vast majority of Sarajevo’s population are Muslim Bosniaks. Still, you see fewer women wearing headscarves here than you would in London or Berlin.

Mirna laughs when I tell her about this discovery: “The ones you saw were probably visitors from Muslim countries or Turkish women who come to study here because they can’t wear headscarves at their home universities!” She tells me how people from Arabic countries, wanting to support their Muslim brothers, came to Bosnia and Herzegovina during the war. But not many stayed because they were disappointed by the way Islam was practised here. “We have our very own branch of Islam, which is different from the Turkish one, too.”

In Bosnia and Herzegovina there has always been a very European kind of Islam, integrating local tradition and mixing with other groups. It is a self-confident version whose followers never had to justify the diversity of their religious practices. “Islam is one of Europe’s foundations,” explains Mirna. “In Spain, Christians and Muslims have lived together and learned from each other. The Muslims influenced the Renaissance by passing on Greek knowledge,” Lara adds.

“The European experience of Islam” is what Mustafa Cerić, Reisu-l-Ulema (Grand Mufti) of Bosnia and Herzegovina would like to have it called. He has received several prizes for his attempts to establish an interreligious dialogue in Europe and has often emphasised how Islamic values correspond well with European democratic ideas. However, when I talk about him, I end up with the same unsatisfying and ambiguous feeling I have had so often in this country. “He is a politician,” says Mirna, and usually that doesn’t mean anything good in Bosnia and Herzegovina. Cerić has promoted the idea of a European Imanat, as a reference for all European Muslims, and is suspected of wanting the position himself. Secular Bosniaks regard him as too conservative and too much involved in the national Bosniak party SDA, of which he is a co-founder.

So instead of visiting his seat, the Emperor’s Mosque, I go to the Islamic faculty in Sarajevo, where one of the professors shows me around the beautiful building. She tells me how the faculty recently started to cooperate with Tubingen University, where the first chair for Islamic theology in Germany was founded in order to educate German Imams and religious teachers. Suddenly, the East is helping the West, rather than the other way round.

The end and maybe a start

Many countries could learn a lot from this region about a religion that has in some ways shaped their identity but still is regarded as an alien element on the continent. However, 17 years after the war, the European concern for Bosnia and Herzegovina seems to have ceased. “We could be a good example, but Europe is not so interested.” says Mirna. “I think Turkey is more connected to Europe than we are.”

The EU might want to question its agenda, when people from countries in its middle stop feeling European because the term is monopolised by a trade union.

The EU might want to question its agenda when people from countries right in the middle of the continent stop feeling European because the term is monopolised by a trade union. I have searched Bosnia and Herzegovina for a European identity for a week but it would be euphemistic to say I captured it. There are many diffuse ideas here of a continent where human and civil rights are implemented and peace and stability reigns. But it stays a utopia, a vague concept, not a given state. It seems too hard at the moment to think about a European identity, when it would be far more important to form a Bosnian one. The young generation is tired of fighting the blocked political system. “Why should I waste the best years of my life building up a Bosnian identity, when this messed-up country already stole my childhood?” says Lara. And so the brain-drain continues and nobody is left to stand up and fight prejudices.

The European parties should not forget the responsibilities they took over when signing the Dayton agreement. There is corruption and injustice to be fought and there are mines to be defused – in the hills and in people’s hearts. And though the country might seem forlorn in one way, there is still so much life here and enough citizens who would really like to see change. With a little support, a true economic plan and more rigid action against nationalism, a lot could be done.

Julia Schulte reported about her trip at the Körber Forum, in the context of the debate ‘Does Europe lack cohesion?’, organized in cooperation with the Körber Foundation, EnI and Eurozine. 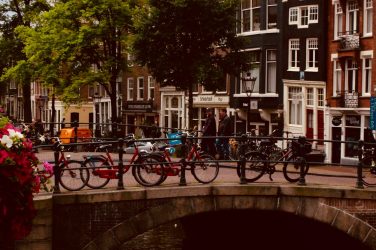 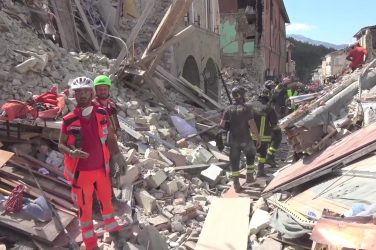 2016’s central Italian earthquake: what was exposed beneath the rubble?