Just like treasure, Green Gems can be hidden under the sea. Learn all (even the gross details you didn’t want to hear) about a summer delicacy: the mussel.

At E&M we are passionate about nature, so we set out to explore our particular biodiversity in a different way. In Europe’s Green Gems you will learn about the hidden gems of Europe’s biodiversity – which, just like treasure, might be hidden under the sea. In this issue, Erik Gerritsen tells us all the secrets about a European summer delicacy: the blue mussel.

The blue or edible mussel (Mytilus edulis) is a species not many know by name, yet many have eaten this mollusc for lunch or dinner. Summer is a good time to find them in their natural habitat. What do we know about this delicacy?

The blue mussel which has become a popular food is just one of the 85,000 known living species of mollusc, a diverse group within the animal kingdom that includes for example squids and snails. Molluscs have been some of the most successful animals on Earth: next to the large number of living molluscs, so far an additional 50,000 fossil species have been identified. There are probably more molluscs still to be discovered, so if you feel like having a species named after you or one of your friends, why not give it a try? Unlike most other molluscs, mussels managed to conquer the world without possessing what we might consider essential to this objective: a head.

Finding blue mussels should be pretty straightforward. You will find edible mussels in all European seas, including the Baltic and Mediterranean where evolution led to two slightly different species than the Blue mussel native to the North Atlantic. Mussels grow about 8-9 cm long but can measure up to 14 cm in extreme cases. Unlike most of their family members, Blue mussels are not hidden on the seafloor, but live out in the open and defend themselves by means of a strong and heavy shell. Their habitat is the intertidal zone, a difficult environment to live in with regular absence of water and impact of waves. An important reason why us land-dwellers normally see mussels closed hermetically unless they’re on our plate.

To harness themselves against the violence of breakers, mussels attach themselves to a hard substrate, usually stones or other solid materials such as driftwood. Harbours are an easy place to find mussels as there is plenty of rock around. To attach themselves to their foundation, they produce sticky and slightly elastic threads called byssus threads. Byssus threads consist of proteins that solidify on contact with salt water. This special skill has been studied closely by medical science in the hope of improving stitching methods.

Various pre-historic excavations show an early human appetite for mussels. The first recorded mussel breeding in Europe, still known as ‘bouchot’ rearing, dates from 1235 in France. A 16th-century story goes that a shipwrecked Scot, Patrick Walton, ran aground in the bay d’Aiguillon in 1235. He was rescued by the locals and decided to stay and earn his living by catching birds on the mudflats in the bay as he knew from home. On the poles that held up his net, mussels quickly settled and grew rapidly. Growth and jobs in the making! Nowadays, mussels support an entire industry: production of blue and Mediterranean mussels totals about half a million tonnes per year with a value of over €300 million.

The first recorded mussel breeding in Europe, still known as ‘bouchot’ rearing, dates from 1235 in France.

Blue mussels have different sexes, and have an outright lazy way of reproducing: males and females simply release their reproduction cells into the sea when the temperature is right – normally in late spring or the beginning of summer. Not an overly targeted strategy, but chasing potential partners is hard when you’ve glued yourself to a rock. No parental care means mussel-babies suffer casualties: of all mussel larvae born, only 1% will grow up and most of them end up as fish food. Mussels only fully grow up in 2 years, and have a life-span of around 5 years – although ages of up to 20 years have been recorded.

The blue mussel’s diet mainly consists of phytoplankton (small sea creatures that live by photosynthesis, like algae), however mussels won’t refuse a tasty bacterium when it floats along. When covered with seawater, the mussel opens its shell and creates a water-flow along its body with the help of small vibrating hairs on its gills. Between the hairs, small particles stick to a continuous flow of mucus that is directed to the mouth. Apart from this mouth and an anus, mussels have a digestive system that includes a stomach, intestines, and kidneys. Don’t think about it too much.

The majority of mussels die of being eaten and need to defend themselves against a wide array of predators. Birds are probably the biggest. Two better-known mussel specialists are the well-named Oystercatcher and the Eider duck, a beautiful large duck known for swallowing mussels entirely and crushing them in its stomach. Smaller but more numerous are predatory sea snails, which are capable of drilling a hole through the mussel’s shell and sucking the mussel out. However, the adult mussel’s arch-enemy is probably the starfish. While we were deceived by Spongebob’s friend Patrick into believing that starfish are lovable good guys, the reality is hard: starfish arm-wrestle as long as it takes for the mussel to take a break, relax its muscles, and open up. At this weak moment the starfish sprays its stomach acid inside the shell. The mussel closes again, but is slowly digested, dies as a consequence, and opens up again for the starfish to dig in.

What else are mussels good for? Natural mussel beds fulfil many ecological functions. Not only do they feed the hungry organisms mentioned above, they also filter the water from various substances. A good example are nutrients, transported by rivers to sea, which in too high concentrations cause  algae bloom in warming estuaries. Some of these algae produce toxins, which accumulate in the mussel’s body. Mussels are therefore carefully monitored to assess water quality. Another ecosystem service that mussel beds fulfil is providing a substrate for other organisms, such as barnacles and sea weed. Mussel banks and sea weed provide shelter for young fish, shrimps and crabs to escape from predators. With some imagination you could see mussel banks as the coral reefs of European estuaries.

Summer is a good time of the year to go out and observe mussels and their neighbours in real life. If you don’t feel like getting your hands dirty, just wait until September when the mussel harvesting season starts. Since the 19th century, when mussels increased in popularity as an alternative source of protein, they have become a common source of food. Cutting down on your meat consumption? Why not replace it with mussels? They are an excellent source of selenium and vitamin B12, and also a good source of zinc and folate. If you eat mussels for the first time, don’t overeat, as the high protein content might make you sick… Now there’s nothing to stop you enjoying nature to the full:

2 kg of fresh mussels (check date – the fresher the better)

6 sticks of celery (leaf and stem)

2 springs of thyme (both approximately 5 cm)

white wine (not too dry, not too sweet)

Remove sand from mussels with cold water. Living mussels are normally closed when you buy them. You can check under cold water whether open mussels are still alive, they will close after a few seconds. Remove all threads and throw away unusually heavy (full of sand), light (empty) or broken mussels. Cut the carrot and onion, and place them with the celery, bay leaves, thyme and pepper in a large, deep pan filled with 0.5 cm of wine. Bring to the boil and simmer for 5 minutes with the lid on. Fill the pan up to a third with mussels and bring to the boil again on a high heat, keeping the lid on. When it boils after about 4 minutes (the lid will come up by itself), take the pan off the heat and stir/shake. Put the lid back on the pan and cook for another 10 seconds. Check whether all mussels are opened – and therefore ready to be eaten. If not, cook longer but check regularly: mussels transform into mussel gum when overcooked! Serve warm mussels in their shells in the broth you cooked them with, along with some bread. Eat them with your fingers while using a pair of empty shells as a tool to pick off the remaining mussels from theirs. Enjoy! 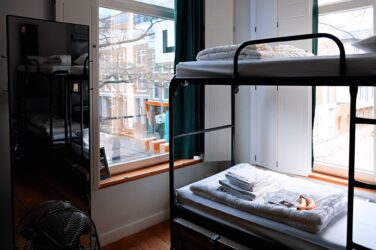 The Social Sanctuary: Private travel and the great social divide

“Hostels are an endangered species” was the alternative title considered by E&M author Ruairidh ... 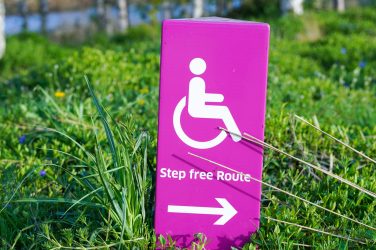 Freedom of movement is a cornerstone of the EU. However, for the 80 million ... 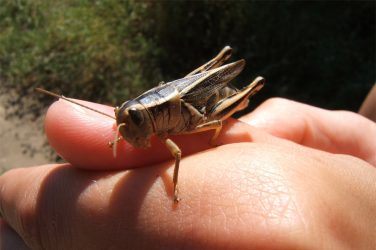 Will eating insects put an end to famine? Learn more about how to become ...